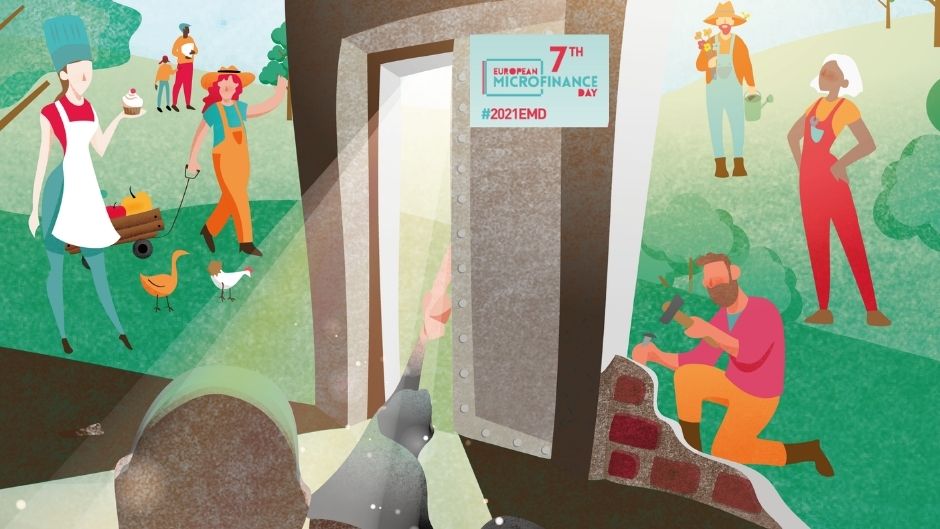 The European Microfinance Day was launched in 2015 as a tool to highlight the impact of the microfinance sector in Europe from a social and an economic perspective.

The main objectives of the European Microfinance Day are:

This year campaign is anchored around a symbolic date, the 15th of October. This date was chosen based on a striking statistic: 21.7% of the EU population is at risk of poverty or social exclusion. In other words, the “system” isn’t working 21.7% of the time. Relative to a calendar year, this means that it breaks down on 15 October, when the doors close for those willing to build a better life for themselves. Microfinance is pushing hard to move this limit further and further year after year, to see the day no one is left behind.

Keepping the doors open for all entrepreneurs

microlux contributes to the EMD campaign with two local actions :

It is a travalling exhibition presenting the main results of microlux’s 1st social impact study and showcasing examples of successful entrepreneurs supported by microlux. It will take place, during four weeks, starting from 12th October, in the four main locations of retail company Cactus.

It is a great opportunity to raise awareness about microcredit as a tool for social and financial inclusion, especially in Europe, and Luxembourg where microfinance is still viewed as a concept for developing countries.

26th October-02th November: “Create your own business with microlux!”

It is a national campaign through JDecaux’s network and sponsored by insurance company Sogelife.

It will take place from 26th October to 2nd November on posters at all the train stations’ undergrounds of Luxembourg and on digital screens at two shopping malls (Esch-Belva and Cora Foetz).

This campaign will showcase 3 successful entrepreneurs supported by microlux to encourage others to follow their path and to create their own business with the help of microlux.